We took part in one of those elephant gift gatherings. The rules are each person picks a number and whoever goes first picks a gift, and the next number can "steal" the first person's gift or grab a new one, until the last person who decides on keeping the penultimate person's gift or grab the last unopened wrapped gift. At the end of a dozen people, this was the gift that everyone kept on "stealing". The reason is that its great. 24 bath bombs that can be modified to any color scheme you want. There is a hefty variety of colors and scents to choose from. As a bonus, the packaging is aesthetically beautiful.great gift for someone.

J
Joshua A.
Know your own skin!

The product was a surprise for my wife. I got her another brand which she loves but is double the cost per unit. (these are two different types of bath bombs, nothing wrong with these nor is it an attempt to compare the two based on cost.) As well as a box of these. The packaging and boxes were well done and showed care was taken. Opening the main box for the first time was that distinctive smell when you open a box of bath bombs. My wife gave me a warning they may irritate her skin as this type of bath bomb has in the past. She used one and only put her lower legs in the bath water, later that evening her legs were red and irritated (she was aware this might happen and so it was only her legs to find out. Thats why the headline is know your skin (my wife did and was thankful she only did her legs.So why would I give a product 5 stars when my wife had such a bad reaction you ask?Everyones skin is different and reacts different to soaps, lotions, anything we put on our skin and its not fair to blame this product. My wife tried it before going all in knowing it may irritate her skin. The response I received after the fact was amazing. Customer service was spot on. Fast response, no nonsense or being jerked around, just made me happy without any in depth questioning.Remember the nice packaging I mentioned? It was a large box with 4 smaller boxes inside each with six bombs in each box. I expected to pay for the small open box and hoped they would take three boxes back. Nope, full refund without more than my explanation which was even less in depth than this review.Buy from this company they have customer service at 5 stars.

This product is gorgeous. I chose this product for its organic quality and good price. I chose free delivery but surprisingly the package arrived in two days. The bath bombs smells good and relaxing. The bath water is pleasant with the bombs. 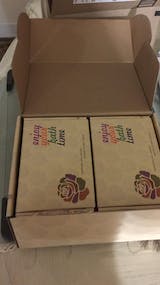 My kids (boys 3&6) love these bombs. Each box has the same set of bombs in them - the smell is lovely and not too overwhelming or fruity. Gets them so excited for bath knowing they get to pick out their own bombs. My 3yo say and watched his bomb fizzle until it was a tiny little crystal - it kept its colors the whole time, and mesmerized him for a solid 10min � bath cleaned up easily afterwards as well with no residue. They’re smaller than what you might see at the store, but lasted long and had great colors and scents. Def recommend!

These are the best I’ve tried and the price is fantastic! The smells of each one is amazing! Very high quality even down to the packaging. They put threads in the plastic for easy removal. I don’t like getting out of my bath now. I have sensitive skin and these are perfect. They seemed small but I tell you good things come in small packages. My mom was in town and tried them and now she is ordering them. I’ve ordered others and even bought from major stores in the malls, I like these the best!!!! You will not be disappointed.

15 minutes ago from Portland, OR.
Madison purchased a

15 minutes ago from Boise, ID.
Emma purchased a

7 minutes ago from Phoenix, AZ.
Jackson purchased a

17 minutes ago from Austin, TX.
Aiden purchased a

10 minutes ago from Los Angeles, CA.
Ava purchased a

8 minutes ago from Cheyenne, WY.
Liam purchased a

2 minutes ago from Atlanta, GA.
Mia purchased a

18 minutes ago from Portland, ME.
Lucas purchased a

4 minutes ago from Denver, CO.
Isabella purchased a

3 minutes ago from Hartford, CT.
Noah purchased a

2 minutes ago from Topeka, KS.
Zoe purchased a

12 minutes ago from Boston, MA.
Mason purchased a

15 minutes ago from St. Paul, MN.
Lily purchased a

12 minutes ago from San Diego, CA.
Ethan purchased a

9 minutes ago from Harrisburg, PA.
Caden purchased a

14 minutes ago from Albany, NY.
Logan purchased a

9 minutes ago from Santa Maria, CA.
Emily purchased a

8 minutes ago from Portland, OR.
Bryan purchased a

11 minutes ago from Boise, ID.
Nicholas purchased a

2 minutes ago from Phoenix, AZ.